This Afternoon
Mostly sunny, with a high near 64. Windy, with a west northwest wind 28 to 33 mph, with gusts as high as 47 mph.
Tonight
Mostly clear, with a low around 38. West wind 17 to 22 mph decreasing to 7 to 12 mph in the evening. Winds could gust as high as 31 mph.
Sunday
Sunny, with a high near 67. West wind 7 to 9 mph becoming south southwest in the afternoon.
Weather forecast provided by weather.gov.
Search 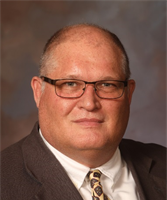 Joe Don started his career in municipal government at Frederick, OK in 1994 as Finance Director/City Treasurer.  He served the City of Altus for six years as the Finance Director before moving to Alva.  During his 25 year employment, Joe Don has served as Past President of the Oklahoma Association of Public Treasurers & Oklahoma Municipal Clerks, Treasurers & Finance Officials Association and Chairman for the Oklahoma Treasurers Institute. In addition, he served as a Director for the Association of Public Treasurers of the United States and Canada and the Mountain Park Master Conservancy District. Joe Don was appointed by Governor Brad Henry to the Task Force on Municipal Finances representing communities under 50,000 population.

Joe Don is currently a member of the Oklahoma Municipal League (OML) Legislative Committee and continues to serve on the OML/OTC Liaison Board as one of its’ founding members. Joe Don represents Northwest Oklahoma Municipal employees on the Oklahoma Municipal Retirement Fund as a trustee.  Joe Don received his Master of Business Administration from Cameron University and is a graduate from the Oklahoma Treasures Institute. He has a Certificate of Achievement in Public Plan Policy.  In Alva, he lives with his wife Sheri and daughter, Jonelle.